Thank you for your interest in the BrushFires Ministry workbook.  Many leaders, who have taken our workshop, have determined that their staff and families should also take the workshop to be used in the ministering to their flock and the building up of their own family's lives.  This workbook allows our training to be shared with your staff, congregations, small groups, friends and family.  It contains self discovery questions, links to our videos and personal insights into each person's unique God Given Design.

Many have determined to share our program based upon the unique ministry that is BrushFires.  Our program's ability to reveal to others the intentional way that the Father has designed everyone gives them a more effective and impactful approach to ministering to their flock.  They are often excited to share this training with their families and friends.

BrushFires' primary focus is to followers of Jesus Christ.  We recognize that most believers are not involved in a meaningful ministry of their own.  Many believers think that ministry is the responsibility of the church staff.  We have been effectively making the case that ministry is for all followers of Jesus Christ. Just because you don't see yourself in the Worship Leader, Senior Pastor or traveling missionary roles, does not mean that the Father does not have a specific, intentional and uniquely fulfilling ministry for you to get involved in.   BrushFires' focus is the 80% that attend church and don't get connected to the body in a meaningful way.  BrushFires helps them to find their place, encourages them to serve and put roots into the body of Christ.  We uncover leaders, servants and the missing pieces for all ministries.

We are happy to meet with any leader to discuss this further. 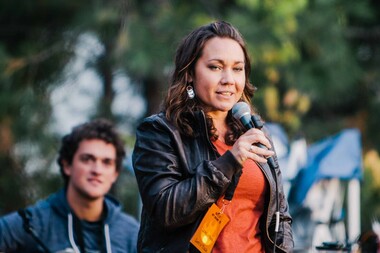 ​Samantha Means is a former United States Marine, an international missionary, speaker, and the author of multiple fiction and non-fiction books.

She began her writing career as a novelist in 2012 after she left the service. Four novels later, in 2018, Samantha took her first BrushFires workshop. It was here she received her personal Purpose Statement and an invitation to a whole new way of life. Shortly after receiving her Purpose Statement, Samantha felt the Lord calling her to write her first Christian-living book, Victim to Victorious: A Journey of Overcoming. It was published in 2019, followed by the devotional, Victim to Victorious: 70 Days of Victorious Living. In 2020 she began collaborating with JR to write the workbook, BrushFires: Discover Your Divine Design.

Samantha continues to write faith-based women’s fiction under the penname Ann Collins, which means: Grace, People’s Victory. Today, she lives in north Idaho where she writes, speaks, and ministers to women who desire to live the victorious life in Jesus Christ.

A Winter Storm
By Ann Collins

Grace Winter thought she was free from the shame that haunted her childhood when she publishes a book, her story, of redemption. But when her boyfriend wants to spend their Christmas with her family, she becomes aware of how far she is from freedom. As she revisits her past, Grace attempts to juggle who she is, who others want her to be, and the expectations of her faith. When her first love comes into her life again, changed in all the right ways, he helps her discover a desire for what she never thought was possible to have: true love and freedom from a life dominated by secrets and lies. On this journey she must choose what her heart desires, between keeping the peace and bringing the truth to light, and will find out whether it's possible to forgive the unforgivable.​
Winter Storm Reviews 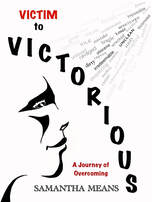 Victim to Victorious: A Journey of Overcoming
By Samantha Means

It’s possible to live the victorious life in Christ no matter how severe your trauma or how devastating your losses. The promises in God’s Word are for you, for today, for right now. By taking a holistic look at our design, Victim to Victorious addresses the physical, mental, emotional and spiritual impact of trauma and how to practically walk in victory as a child of God. If you’re still breathing, God still has a plan for your life; and it’s for the abundant life. Samantha Means takes the reader on her most personal journey yet: discovering what it means to be victorious in Christ regardless of your circumstances. Including practical steps, scriptures, scientific research and more, Victim to Victorious provides a foundation to begin living from victory, rather than toward it.
Victim To Victorious Reviews

Victim to Victorious: 70 Days of Victorious Living, a devotional
By Samantha Means

Learning to live victoriously happens one choice at a time. This devotional will guide you through seventy days of step-by-step victorious living, regardless of your circumstances. With personal stories that will take you around the world, from poverty to wealth, trauma to blessed connection, Samantha Means will guide you in living from victory rather than toward victory. One day at a time, one question, one application and Bible verse at a time, Samantha Means will assist you on your journey while sharing her own testimonies to bring you encouragement, inspiration, and hope. You are not alone, and victory is here.
Victim To Victorious Devotional Reviews

All Moira Jameson has left of her mother is what’s in the journals willed to her, and there are far more secrets to her mother’s past than Moira could have imagined. As she learns about the woman behind the veil of motherhood, she finds her judgments of her mother have been, at best, unfounded. Her secret has wounded generations, and in getting to the bottom of it Moira finds her faith and all she’s ever believed in to be challenged, and she has to ask herself if, in giving her the journals, her mother is asking for something in return beyond the grave.
Fortune Lost Reviews

Moira is hiding one of the rarest diamonds in history and the man who lost it is on the hunt to get it back at any cost. As she tries to find the connection between the diamond and the journals her mother left her when she died, Moira discovers a pattern of secrets and lies that have wounded generations. In the midst of deceit, she also finds faith that surpasses hopeless circumstances. In her pursuit for truth, a ripple effect takes place that brings a private investigator closure, freedom to an old man enslaved to years of bondage, and a second chance to another who lost everything he held dear. Will Moira use the truth she found to stop the cycle of deceit? Will she have enough faith to help her overcome her own loss?
Fortune Found Reviews

Little is left for Moira in Rockpoint. After losing her mother she must decide what she’s going to do with her life and the multi-million-dollar diamond she keeps a secret. Meanwhile, Moira navigates her grandparent’s past through treasures and truth kept safe in a shoe box. Bits and pieces of her mother’s history continues to surface, providing some much-needed closure. From the shores of Ireland in WWII to the rolling New England hills throughout the 1950s, Moira sees how some mistakes can have consequences that last for decades. Determined to stop the cycle of deceit and compromise, she discovers a new path and finds it may take more faith and strength than she possesses. As her relationship with Cale gets more complicated, the threat of losing her home and her job becomes more prominent, Moira begins to explore another relationship she never thought was possible. It may just pull her away from everything she’s ever known to receive more than she ever hoped for.
Fortune Restored Reviews